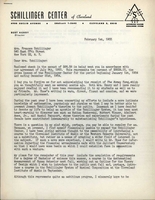 Correspondence & coursework: Jerome Gross
Correspondence between Dr. Gross & the Schillingers, discussing the course and Dr. Gross’ progress. Other materials include an assignment on Instrumental Form, as well as a 1956 letter to Frances Schillinger from Bert Henry regarding proceeds paid to her from his Schillinger Center of Cleveland. 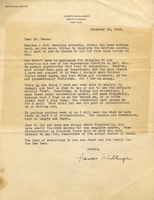 Pamphlets and flyers
The materials in this folder appear to have been passed on from Jerome Gross and/or his widow to Bert Henry. Includes promotional materials for the Schillinger System of Musical Composition, a Kaleidophone article (“Plain Talk on Musical Genius”), and a "Music News" pamphlet.